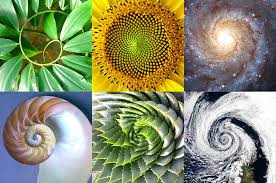 What do DNA molecules, Flower petals, Shells, Pinecones & Spiral Galaxies have in common?

The Golden ratio also appears in all forms of nature and science.

The Golden ratio is a special number found by dividing a line into two parts so that the longer part divided by the smaller part is also equal to the whole length divided by the longer part. It is often symbolized using phi, after the 21st letter of the Greek alphabet. In an equation form, it looks like this:

Phidias (500 B.C. – 432 B.C.) was a Greek sculptor and mathematician who is thought to have applied phi to the design of sculptures for the Parthenon. Later, Euclid (365 B.C. – 300 B.C.) linked the Golden ratio to the construction of a pentagram.

In 1509, Luca Pacioli wrote a book that refers to the number as the “Divine Proportion,” which was illustrated by Leonardo da Vinci. Da Vinci later called this sectio aurea or the Golden section. The Golden ratio was used to achieve balance and beauty in many Renaissance paintings and sculptures. Da Vinci himself used the Golden ratio to define all of the proportions in his Last Supper, including the dimensions of the table and the proportions of the walls and backgrounds. The Golden ratio also appears in da Vinci’s Vitruvian Man and the Mona Lisa. Other artists who employed the Golden ratio include Michelangelo, Raphael, Rembrandt, Seurat, and Salvador Dali.