Translation apps like Google Translate have been assisting new arrivals in Spain for years. The typing and voice translators are well-known, but other handy features are hiding in plain sight waiting to make your life easier! 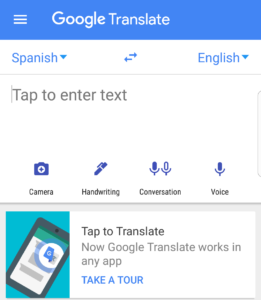 If you’ve spent hours typing short pieces of written Spanish into a translation app, you might be about to kick yourself…

If you select the camera function on Google Translate, you can point your phone directly at written Spanish and it will translate it for you. The app will translate the words it is ‘reading’ directly onscreen for you, which is great if you’re looking at a short phrase or just 1 or 2 words. However if you need to translate a longer passage then it will be best to take a photo of the writing and then it will give you a separate written translation to read.

You can also upload pictures from your camera roll, so if you see something you’d like to translate later just snap a picture.

This feature isn’t ideal for long documents but perfect for food packages, menus, signs, and other short paragraphs.

Translate from other apps

This is really a shortcut rather than a new feature. While tap-to-translate is enabled, each time you copy text from any app a bubble will appear with the Google Translate logo on the side of your screen

This involves writing with your finger directly onto your screen and the app will translate to your chosen language. It is a bit of a novelty feature for most people, however there are some circumstances where it might be truly useful, such as if you can’t see to type or if you find typing the small buttons difficult.

Press Star to add to your ‘phrasebook’

If you scroll down while on the app, your recent translations are listed under the box. There is a white star next to them. If you tap the star it will turn yellow, meaning it has been added to your ‘phrasebook’. Handy for storing phrases you’d like to remember for later!

To use all the features on the Google Translate app, you need a smartphone. We have a range of smartphones in stock, including the famously easy-to-use Alcatel U5. Give us a call or fill out the ‘Tell me More’ form on this page and we will be happy to talk you through your options and recommend the best one for you.

Grow your own Advocado Plant
September 14, 2020

Version: 2.6.22 Language: en Referrer: Cookie: Domain: .telitec.com
Go to Top
X
We use cookies to ensure that we give you the best experience on our website. If you continue to use this site we will assume that you are happy with it.Ok