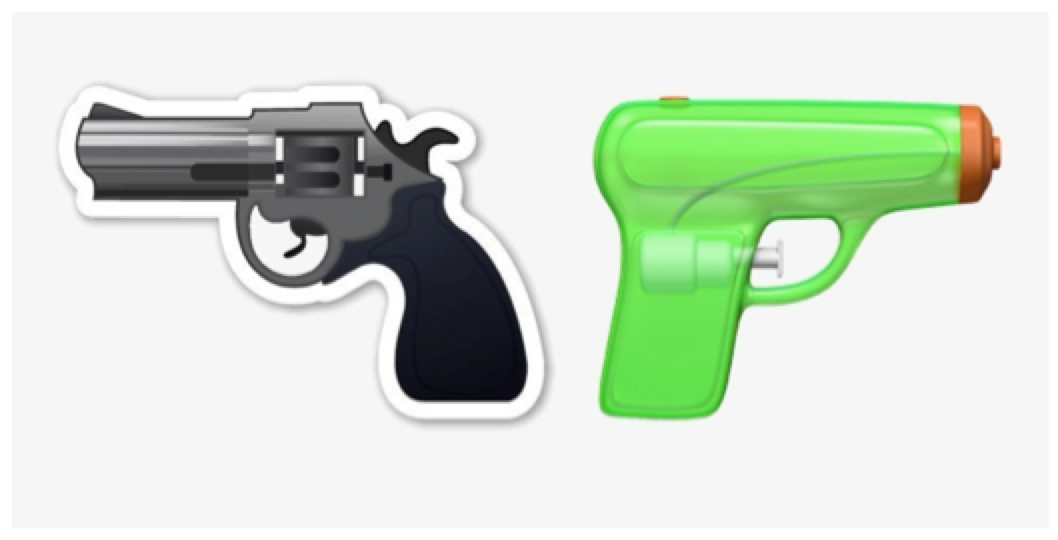 Emojis have become a fun way to message in today’s text speak world, often replacing words with just an emoji to represent how you feel. The collection is ever expanding on the 1,851 characters we have come to know and love.

Now, Apple have made the decision to drop the emoji handgun currently used, for a green and orange water pistol. It’s not surprising considering the state of gun crime in the USA, and the rest of the world isn’t without gun crime either. This seems to be a statement about Apple’s stance towards gun violence.

Now the change has sparked a debate amongst critics.

One view is that the change could retroactively change the meaning of historic messages and texts, setting a dangerous precedent and could also spread confusion. Also, there could be problems cross-platform. If someone you send an emoji to is using another platform then you could end up sending a water pistol emoji as a joke, but the other person receiving it as the original gun….so they might think you want to shoot them L, or at least not see it as the joke it was intended.

In opposition, another view suspected that the impact of the change of historic meaning would be slight, and not really confuse people. Rather, many consumers will be upset people who view this as yet another attempt by the technological thought police to impose a point of view on them.

Another view is that even though Apple is being politically correct by getting rid of the gun, in fact they are only drawing more attention to the problem. What not many people know is that Apple have funded many initiatives to limit access that people have to firearms. They are definitely anti-gun, so if this is their way of making a stance, then good for them for drawing attention to the issue without offering an explanation for the change.

The move is also being looked at as a victory for anti-gun group New Yorkers Against Gun Violence that last year criticized Apple for including the gun emoji.

Apple will introduce the new water pistol gun emoji with the new release of iOS 10 in the Autumn. The water pistol is one of more than 100 new characters being introduced. And for the few of you who have given up on words altogether there’s even a Kim Kardashian themed collection, amongst cold black hearts, genitals, gherkins and ducks!!!!!

Grow your own Advocado Plant
September 14, 2020

Version: 2.4.19 Language: Referrer: Cookie: Domain: www.telitec.com
Go to Top
X
We use cookies to ensure that we give you the best experience on our website. If you continue to use this site we will assume that you are happy with it.Ok